Adapters for controlling from steering wheel

4CarMedia offers a perfect solution for those who can no longer use their steering wheel controls after replacing their stock radio.

Check out a full range of professional accessories for car audio installations!

Accessories for car audio installation constitute essential elements of every audio system. Without them, it is impossible to connect main components and turn on the audio equipment.

If you need to disassemble your car radio in a quick and safe manner, we have the perfect tools for this!
More

How to reduce noise in your car?

Noise disturbs the driver and makes it harder for him/her to distinguish signals coming from outside of the vehicle. What is more, research shows that loud sounds decrease orienteering skills, and may even impair eyesight.

Noise influences the entire organism, especially the central nervous system, and it has negative impact on perception and concentration.

Sound over 35 decibels, i.e. louder that the majority of sounds of nature, is harmful to human health.

Prolonged stay in a place of loud noise:

The effects of being exposed to high level of noise disappear in time, but they impact our abilities to drive a vehicle. 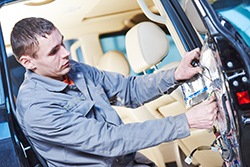 Until the last decade of the previous century, cars were sound-insulated only with the use of passive methods, i.e. the idea was that the noise had to be damped by the sheer construction of the car, and primarily by the type and thickness of components separating passengers from the engine or the road. Passive methods are naturally used nowadays as well, and the more tight and heavy insulation materials used, the more effective the insulation.

This approach to soundproofing cars influences the prices. Cars that offer silence are not only more expensive, but their operating costs are higher as well, as their weight impacts fuel consumption.

An alternative to sound insulation is the ANR (Active Noise Reduction) system.

It is the so-called anti-noise or noise cancellation method. It is a sound emitted by a speaker, which reduces the volume of engine-induced sounds.

When combining, the sound waves cancel each other out, which results in less noise inside the car. The system isn’t prefect, though. It strongly depends on the quality of transducers receiving the sounds of the engine, algorithms calculating the volume of anti-noise, as well as the speakers used while driving.

Soundproofing on your own

Car workshops offer the service of installing additional soundproofing materials, such as:

The cost depends on which part of the car we want to insulate, as well as on the type and amount of the material used.

The materials should be mounted:

Door insulation ensures that vehicles passing by won’t generate loud whistling, and driving at high speed will become noticeably quieter. Even the sound of closing door will change from a loud slam to a click.

However, you need to remember that soundproofing your car will result in an increase in its weight. Pads are heavy, and they can impact fuel consumption levels in a similar way to carrying an additional passenger.

The level of noise reaching the driver and the passengers is also influenced by tyres, namely the width of tyres and the thread pattern.

Slicker tyre usually means less noise. However, there are exceptions to that – slick tyres are louder on rough surfaces. If the thread pattern is asymmetric, directional, and composed of small blocks, it generates less noise.

Thence, tyres with larger than usual area of contact with the ground, e.g. rain tyres, not only ensure better grip on a wet surface, but also reduce the loudness of air whistling in the grooves.

When buying tyres, various aspects should be considered, and loudness is definitely not the most important one. However, when choosing from a few models with similar parameters, it is worth paying attention to thread patterns that influence, among others, the volume of generated sound.

There’s no doubt that it is a good idea to soundproof your car. You don’t have to decrease the noise by dozens of decibels. Even a slight improvement is clearly hearable to the human ear. Reducing the noise level by 3dB means half as onerous noise to the driver and the passengers.

Email Message has been sent
Feedback